Breal
Search
Relocation / Dislocation Series
​My experience of moving from the UK to the USA has lead me to a series of drawings investigating themes of dislocation, difference, transformation, closeness and distance.  The current political climate naturally influences my explorations in these areas as well. 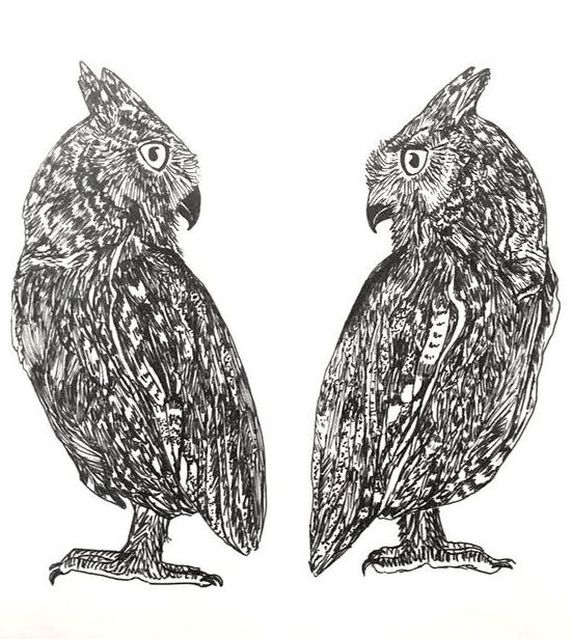 The owls are back to back representing a turning away from each other, but the direction of their gaze suggests a wish to understand one another or just being mystified or bemused by each other.  Their eyes don't quite meet, making me think of the phrase, 'not seeing eye to eye.'  I wanted to make an image that explored the current polarisation of political beliefs, in the UK with those who wanted to remain in the EU and those who wanted to leave and between Labour and Conservative supporters.  When moving to the USA, although a very different climate, there are similarities with the disconnection felt between Republicans and Democrats following the elections in 2017.  I was struck by the rage, frustration, powerlessness and fears of being misunderstood that political movements in recent years have had in various places and the tendency for political polarisation to give rise to more racism, division and classism. 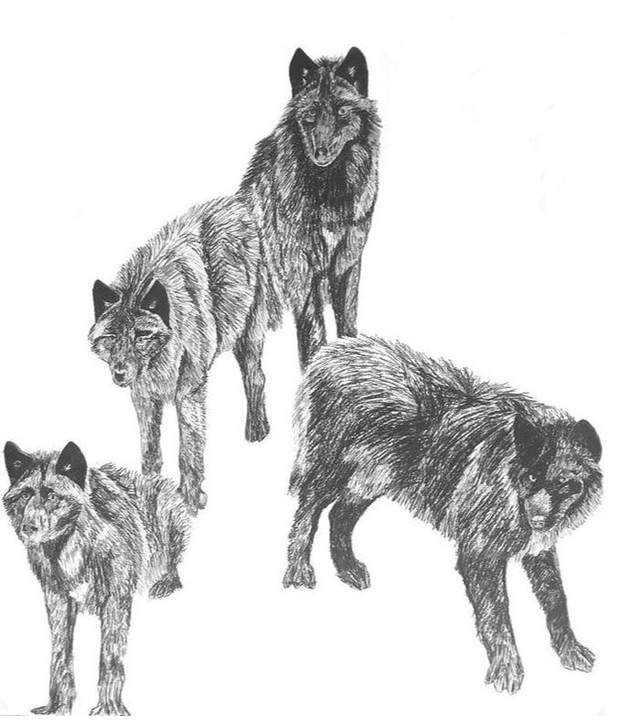 Against the Wall
Charcoal
106 x 86cms

This wolf pack stands protectively, making me think of marginalization in relation to the divisions in the USA and other political movements in the world in the current political climate including the reductionist views of difference.  The 'walls' or boundaries between people become less permeable until thinking becomes concrete and physical walls or barriers are suggested.  I feel this also relates to  people retreating into smaller or more restricted groups as a means of feeling safe and understood, taking different positions defensively within the pack.  The feeling of being backed into  a corner feels rife today with divisions, stereotyping and misconceptions. 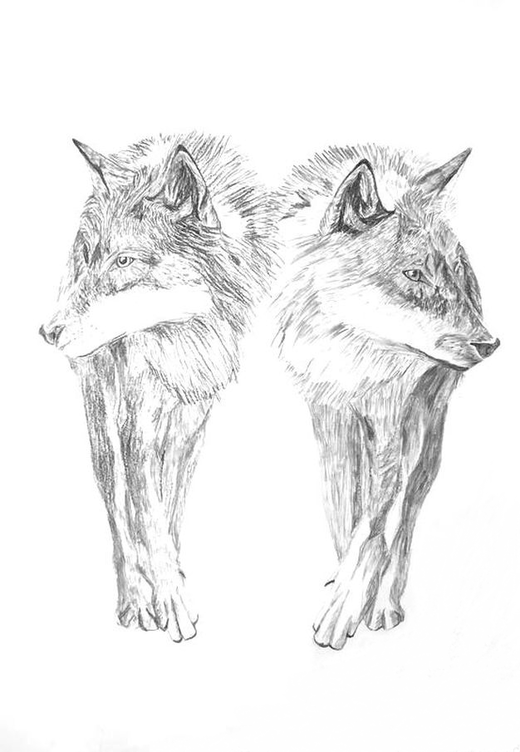 The two wolves represent two parts of the same wolf, connected but going in different directions.  This relates to moving countries and exploring aspects of identity in different places. 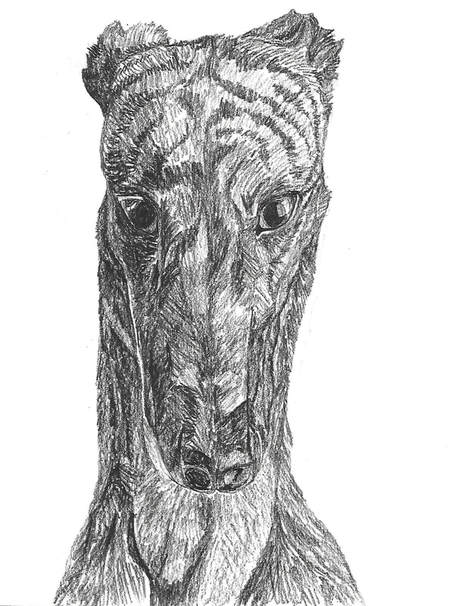 Greyhounds have been used in mythology and literature as symbols of friendship and loyalty.  To me they represent uncertainty and timidness as well and this greyhound's expression definitely hints at this.  This experience relates to dislocation and being unsure of oneself in a new environment. 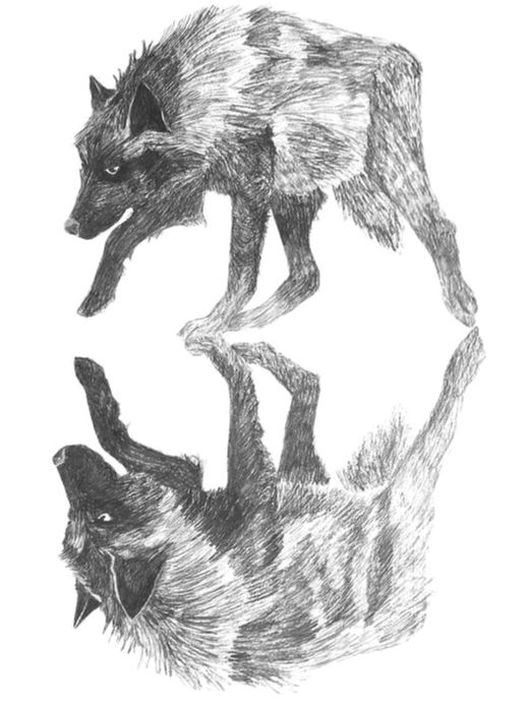 ​This wolf is connected to its shadow/reflection at its feet. These images of reflection and repetition are related to moving countries and experiencing a shift in identity.  The reflection makes me think of the weight we carry with inherited identity. For me, being British, being white and being a woman for example. Often what we are perceived as carries weight before we are fully known.  The element of a reflection or a mirror image in this drawing feels relevant to this.  The reflection is larger than the wolf itself making me think of the size of inherited identity in relation to culture, history and appearance. 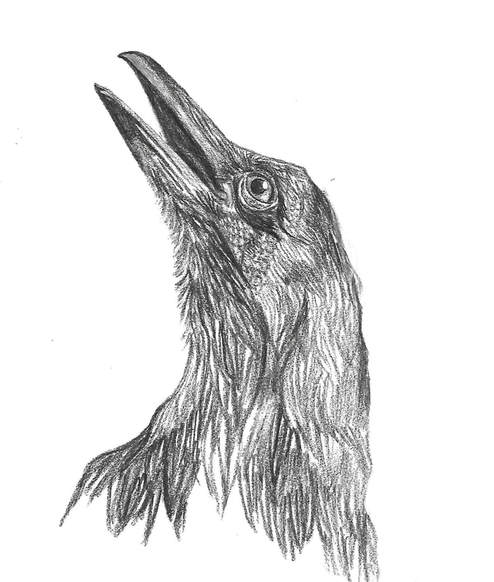 I was inspired to look at crows by a story of a little girl who fed crows everyday and they started to bring her trinkets, shiny items and other gifts.  Crows have the capacity to remember faces and hold grudges.  People in her community had accused her of using the crows for stealing items from her neighbors.  I'm interested in the contrast here of the girl's experience of the crows and the community's, showing how easily things can be misunderstood. 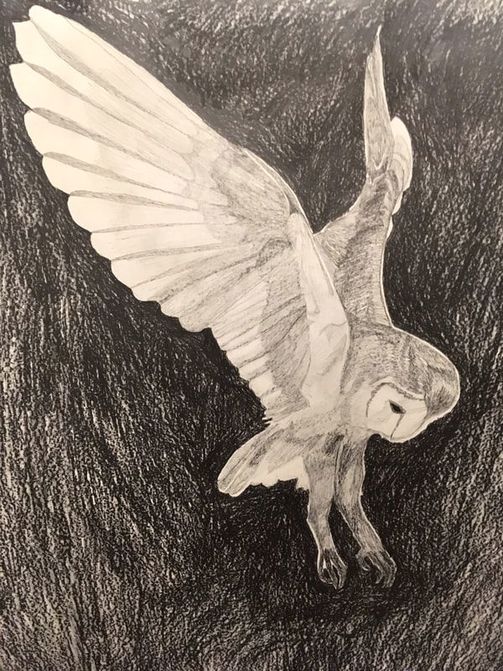 This owl was inspired by an old Anglo-Saxon word, 'Shelter Feather' (hleów-feðer) meaning ​'a comforting or protective arm placed around someone or something' mentioned by Robert Macfarlane in his interview for BBC Radio 6.  This owl is coming into land, relating to my 'landing' in another country.  Held in suspense, it is uncertain what the ground will be like. 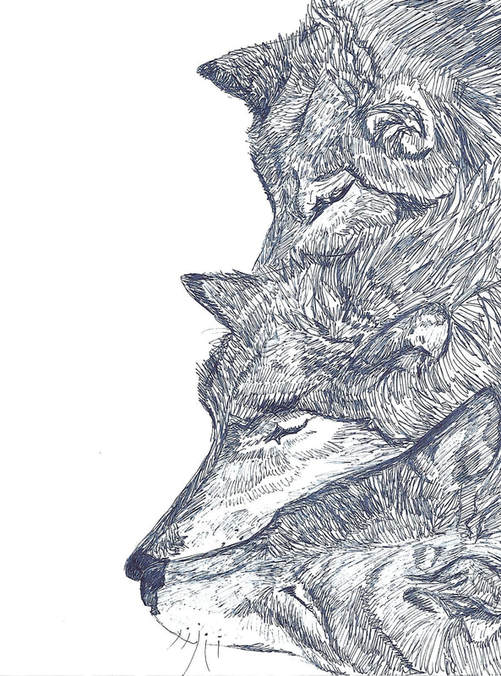 I was struck by the expression of being 'fur to fur' in Lois Crisler's description of wolves, reminding me of close contact and the communication of comfort and being known in this.